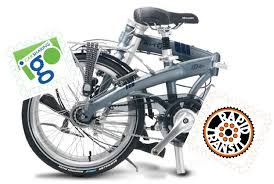 One clever office provider in Santa Monica found a clever way to combine folding bikes, valets, and mobiles apps to solve their parking problems.  Since the office provider has a  proprietary system, I will describe it generally.

I can tell you from experience that Angelenos, even techies, do not like to walk very far from their parking space to their office space.  One company recently told me that they feared a two block walk from the parking lot to the office would hamper its recruitment of bright engineers.

Office commuters will accept valets as a parking solution.  However, valets can only accommodate so many more cars on an office building parking lot. It would greatly help the situation if the valet could also park the car within a mile (preferably a half mile from the office building).  So how does the valet  get back from those offsite spaces within an acceptable time?  This is where the folding bike/ electric scooter and the mobile app come in.

With the mobile app, the office worker can request his car ahead of the time he wants it by sending an internal text to the valet.  The location of the car is saved in the internal cloud by the valet via mobile app.  Thus the worker can request his car ahead of time based on the advised wait time. One office provider has successfully implemented this type of system in Santa Monica and is considering developing the service for others.

One mobile valet app already live is described below.