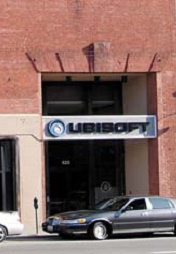 PMI is pleased to announce a successful lease signing in San Francisco: Ubisoft, a world-renowned video game company, has extended their 42,429 square foot lease at 625 Third Street for an additional seven year term.

Ubisoft Entertainment SA is an award winning French company that is engaged in the development, publishing and distribution of video games. It offers a wide portfolio of products, such as Far Cry, Tom Clancy’s Splinter Cell, Prince of Persia, Tom Clancy’s Rainbow Six, Petz, Shaun White, Driver, and Assassin’s Creed (which was recently adopted to feature film, starring Michael Fassbender). Ubisoft Entertainment SA operates through its subsidiaries, including Ubisoft Inc. in the United States, Ubisoft Ltd in the United Kingdom, Ubisoft GmbH in Germany, Ubisoft France SAS and others. The Company’s subsidiaries are located in 28 countries, such as France, Spain, the United States and China, and the Company’s distribution network covers more than 55 countries around the world. Ubisoft had sales of approximately $1.7 billion in 2016 and a book net worth of over $1 billion.
Ubisoft’s lease at 625 Third Street dates back to 2005; PMI acquired the building in 2010, during the recession. 625 Third is located in San Francisco’s desirable SOMA submarket, the city’s most popular submarket for tech and media companies. The property fronts along Third Street, a main artery carrying traffic into Downtown San Francisco and is one block away from AT&T Park, home of the San Francisco Giants. Ubisoft’s lease covers the entirety of the building (42,429 rentable square feet). They were represented by Matt Hart of Savills Studley.