Silicon Beach in Los Angeles is once again enticing more tech and media companies to relocate their offices, or possible add another branch to this emerging hotbed.

Check out the latest article from the Los Angeles Business Journal to see what tech and media mogul will be joining the Silicon Beach ranks.

Read all about it here:  Patched In | Los Angeles Business Journal.

New York has recaptured most of the jobs lost there during the recession.  Mayor Michael Bloomberg has done a great job at attracting technology tenants to the Big Apple.  For example, Google has a million square foot facility in the Chelsea area of New York.  That space trumps its 100,000 square foot facility in the Venice area of Los Angeles.  The music sharing service Spotify, and Livestream, the market leader for live event coverage, are also located in New York.  There is a website, called Made in NY Digital Map, that points out digital and tech tenants located throughout the city.

Not only is New York attracting tech and digital tenants, but they are also starting to court a substantial piece of L.A.’s film post-production business with a recent tax credit.  New York Governor Andrew Cuomo recently enacted this law, which increases the previous 10% credit to a whopping 30% on post-production costs.  If a company wants to earn a slightly larger credit, they can venture to upstate New York and get a 35% credit.  New York is aggressively going after L.A.’s post production business, which has a heavy concentration on the Westside of Los Angeles.  This is the first type of post-production credit the industry has seen.  Time will tell if companies will move to the East Coast to take advantage of it.

New York has been having an astounding year in TV production, mainly because of its film tax credit program.  They are setting aside more than $400 million a year in order to attract film and TV productions. Compared to the $100 million that California spends, one has to wonder why they aren’t putting up much of a fight against New York.

The Los Angeles Times goes more in-depth about this subject in their recent article.

When PMI first started looking to purchase office buildings in 2003 in San Francisco, a couple of brokers tried to sell us buildings in San Francisco’s Mid-Market areas.  They said it was going to make a comeback.  Most others said that they had heard that for years.  The area had a large population of homeless people, homeless shelters, and single room occupancy housings.  We were told by all the cognoscenti to stay away.

In 2010, San Francisco boomed with tech tenants.  Super star tenants found it difficult to find very large blocks of space in prime areas like SoMa.  One of our tenants, Twitter, started in 6,000 square feet.  They were a runaway success and started shopping for 150,000 square feet with expansion options for another 150,000 square feet.  Twitter threatened to move out of San Francisco because of a city payroll tax that would tax stock options upon their exercise.  San Francisco Mayor Ed Lee set up Mid Market as a payroll tax-free zone.  Real Estate magnate Shorenstien Properties then purchased a million square foot clunker of a building in Mid Market, planned a creative office renovation, and made Twitter a deal they could not refuse.

Another one of our tenants, Zendesk, moved to Mid Market because we were out of space in our SoMa building.  Zendesk got a great deal and achieved their rent objectives.  Yammer, who is also our tenant, moved into the same building that Twitter did after Kilroy wanted too large a letter of credit as security (Yammer was recently purchased by Microsoft–who knew).

So why is it that Mid-Market succeeded this time?  Primarily it is because Twitter became a magnet that attracted other tech tenants.  Mayor Lee and Shorenstien Properties offered Twitter such a fantastic deal they would have been crazy not to accept it.  This was done during a market where creative space was running low because tech business was booming.

In the New Geography of Jobs, Berkeley professor of economics Enrico Moretti comments that super star companies attract other super stars and even “wanna-be” companies like a magnet.  Indeed, he attributes the success of Seattle in tech to the fact that Bill Gates decided to relocate there to scale Microsoft.  In San Francisco, Twitter was the super star and it attracted other companies, like Yammer, among others.  The payroll tax-free zone and a landlord willing to give a cost leader to attract a super star helped.

Here is an article from Reuben and Junius expanding more on the rebirth of Mid-Market. 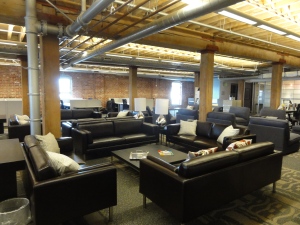 No matter how big the kitchen and break area are in our office suites, the tenants in San Francisco’s South of Market (SoMa) expand them.  Tech tenants are designing more informal work areas and collaboration areas within their space.  These spaces serve as an internal coffee shop or lounge.  These areas can also provide an alternative space from the rows of workstations or tables for employees to work.  Due to the variety and design in these suites, it can be hard to differentiate whether one is in a hotel lobby, coffee shop, fraternity house, or office.  Some tech firms host group lunches to encourage collaboration and require a dining space within an office suite to accommodate this activity.

Here are several pictures from our recent suites ranging from 10,000 to 12,000 square feet displaying these new, collaborative additions. 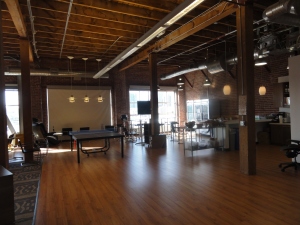 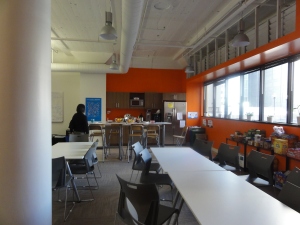 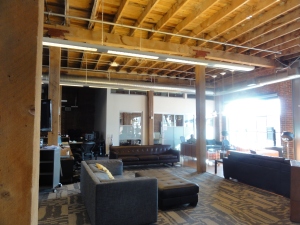 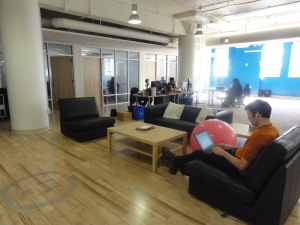 Working on a Couch in the Reception Area